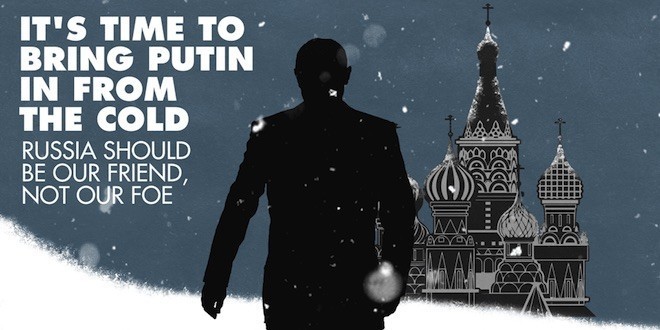 Intelligence Squared debates: «Russia should be our friend, not our foe»

Enough sabre-rattling against Russia! For years, the cold warriors of the Western establishment have been banging the drum against Putin’s resurgent ‘evil empire’. But now there’s a new man in the White House, and he’s got a different approach. President Trump has ripped up the foreign policy playbook, promised a more constructive policy towards Russia and praised Putin as a strong leader that he can cut a deal with. And guess what? He may have a point.

You don’t have to be a fan of Putin or support his invasion of Ukraine and annexation of Crimea to see that an accommodation with Russia might be a good thing. Many would argue that it’s the West that is to blame for the bad blood between both sides in the first place. Ever since the Wall came down, NATO has been expanding eastwards without any regard for Russia’s security interests. It’s perfectly reasonable for Putin to want a Russian sphere of influence made up of neutral states along the country’s borders, and it would be madness to risk World War III trying to stop him. And then there’s Syria. Putin may be helping to prop up Assad, but the real threats in the region are ISIS and al-Qaeda. If Trump and Putin want to combat terrorism together, shouldn’t we welcome that? As Trump tweeted recently: ‘Having a good relationship with Russia is a good thing, not a bad thing’.

That’s the case for thawing relations with Russia. But should we come to an accommodation with a foreign power that bombs civilians indiscriminately, threatens our Eastern European partners, and goes so far as to meddle in the recent US presidential election? The problem is not that the West has been too expansionist towards Russia, but that it hasn’t stood up to Putin’s aggressions. After failing to act over Ukraine and Crimea, the West is now confronted by an emboldened Russia, which is boosting its military and trying to destabilise Europe by cultivating populists such as Marine Le Pen and extremist groups sympathetic to its interests. Russia is an unpredictable, expansionist power and should be kept at arm’s length.

Is it in the West’s interests to bring Putin in from the cold? Or should we be on our guard against an ascendant, belligerent Russia? Join us on Thursday 8th June, hear the arguments and make up your mind.

Speakers for the motion:

Domitilla Sagramoso — Lecturer in Security and Development at the Department of War Studies, King’s College London. She is an expert on conflict and security in Russia and Eurasia, and on terrorism in the Russian North Caucasus. She has also examined Russia’s relations with NATO and the EU. Her forthcoming book is Russian Imperialism Revisited: From Disengagement to Hegemony.

Speakers against the motion:

Michael Hayden — Former Director of the CIA and the NSA under Bill Clinton and George W Bush, and a retired United States Air Force four-star general. He now serves as a Distinguished Visiting Professor at George Mason University, and is the author of Playing to the Edge: American Intelligence in the Age of Terror.

Radek Sikorski — Poland’s Minister of Foreign Affairs from 2007-2014 and Minister of Defence from 2005-2007. A key architect of the European Union’s foreign and security policy, Sikorski is now a Senior Fellow at the University of Harvard’s Center for European Studies.