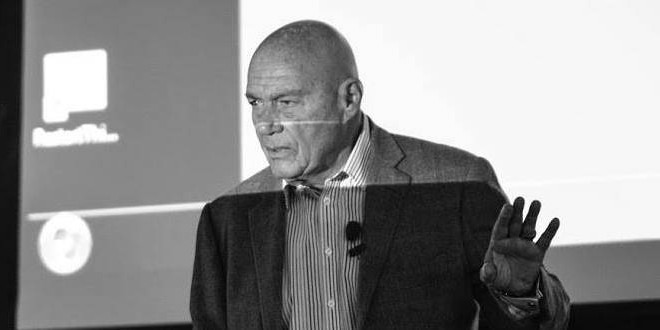 Vladimir Pozner: «The relationship between the West and Russia is dangerous»

Vladimir Pozner, an important figure from Cold War Russia, spoke at Glasgow University today regarding the relationship between his country and the West.

Pozner is a French, American and Russian citizen who, during the Cold War, hosted a talk show in Soviet Russia and later worked for CNBC in America. Pozner’s talk was held in the Glasgow University Union (GUU) debates chamber and was attended by over 400 students and members of the public. Pozner spoke for one hour about his past, his triple citizenship and the experience he had working in Russia and America. Questions were then opened to the audience who queried Pozner about a Russia without Putin, Russia’s involvement in Ukraine, Crimea and Syria, and his view on migration in Europe.

Pozner opened saying “I am not the voice of Russia, although there was a time when I was responsible for Soviet propaganda”. Pozner went on to talk about his family, saying: “My father grew up believing the Soviet Union was the future of the world… We lived in Paris but my mother was in the resistance and my father was pro-soviet, not a good combination in occupied France.”

Pozner spoke in depth about the history of Russia. He said: “Democracy in Russia never existed, it takes a long time, you cannot declare democracy… Imagine Putin takes out a magic wand and says there we have democracy, it wouldn’t happen, it something that is learned, that takes time

The point I’m trying to make is that the west is ever so impatient… I’m impatient too but it is just not possible, there won’t be democracy in Russia for a while, it will take generations. There was a short window of opportunity when Russia could have gone democratic…If the West had acted differently and instead of punishing Russia for the losing the Cold War, it would have been wiser to support democracy.”

Pozner also talked at length about the freedom of the press, both in Russia and in the West, he said: “The wider the audience, the more restriction. There is a paper in Russia with an English title called ‘The New Times’ that is very critical of Russia… Its readership is so low. You would not find that on television”.

Pozner brought up the relationship between Russia and the West, calling its current state ‘dangerous’. He said: “The West needs to be less caught up in its passions about anti-Russia feelings and try to understand why it is the way it is. Russia does not need to be liked or disliked, but understood. The anti-west feeling is stronger now than during the Cold War. Your average Russian is very anti-American, not anti-English or anti-Scottish because the feeling is that there is no English policy vis-a-vis Russia… You are seen as dancers to the American tune, there is not a European country that will stand up to America”.

“I once asked Gorbachev, when you were asked to bring the wall down, the reunification of Germany, did you ask for anything in return? He replied that he asked for NATO not to move forward into the Soviet Union, and Baker promised, it was an oral thing and it should have been written down, but he promised that NATO will stay put. Initially that was true… but then NATO moved Eastward… eventually it was at Estonia on the Russian border…Russians were asking ‘why?’, the Soviet Union does not exist, there is no longer an enemy here”.

Pozner was asked: “If a magic wand made you president of Russia, what would you do?”. He replied: “I would not want to be Russian President, that is a huge responsibility… I do not envy Putin”.