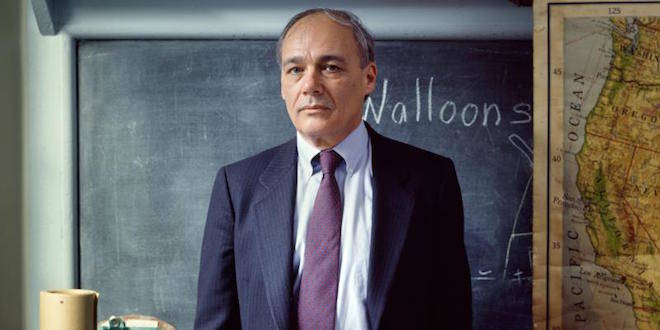 For more than 30 years Vladimir Pozner was the voice and face of Russia – first as a Soviet propagandist on Radio Moscow’s English service, then as a ubiquitous presenter and talking head in the Gorbachev era. At 81, he still hosts a popular weekly interview show on Russian television. While in the past he was presenting Russia to the world, now the traffic has gone into reverse, with a nine-part series to explain modern Britain to the Russian audience.

Having heard his unmistakeable American-accented English on Radio Moscow for so long, I was keen to find out how this Cold War survivor viewed today’s stand-off between Russia and the West. And how did a true believer in Soviet communism navigate the transition through perestroika and back to the more constricted media environment of Putin’s Russia?

Born in France, Pozner and his family escaped the Nazi occupation of Paris to move to New York where his father worked for MGM. Pozner senior spied for Soviet intelligence, under the codename ‘Platon’. He and his family were given Soviet citizenship in 1952.

I asked Pozner if he followed his father into the spy world, and he said that at university he was asked to keep an eye on fellow students. ‘I refused. They tried for two and a half years to recruit me. Finally they offered to send me to Varna, in Bulgaria, disguised as a Swiss citizen. I said I couldn’t pretend to be William Tell.’

As a result he was not allowed to travel abroad, though he describes himself as having been a ‘profound believer’ in the Soviet system. ‘I was a propagandist. That was my job and I loved it. Of course I saw that this country was not at all what my father had told me. And he never realized that had he come back a little bit earlier with us, he would have been shot. We were very lucky that Stalin died two months after we arrived.’ Pozner finally handed in his party card in 1989, when the USSR was clearly on its last legs, since which time he has been a permanent fixture on Russian TV. He has interviewed just about everyone of any importance in modern Russia, with one glaring exception.

Old Moscow hands who covered Russia in the Soviet days warned me that Pozner would be a slippery interviewee and impossible to pin down. In October we met at Chez Geraldine, a Moscow restaurant named after his French mother, which he owns with his brother. Here are excerpts from our conversation.

— Are you surprised that Russia and the West are opponents again?
— I am concerned that in certain ways it’s even worse than during the Cold War, when things were very clear. The issue then was ideology – what system is the future of the world. Nowadays it’s not ideology, it’s as they say in Russian, ‘Who said meow?’ Who’s the big cat? And the big cat is obviously the United States, but the Russian leadership doesn’t want to accept that. It realizes that the United States is the only superpower, but it says everyone has his or her interests and we’re not going to dance to the American tune the way the rest of the world is dancing, in particular Western Europe. And we’re sick and tired of being pushed around and we’re not going to stand for it. This has created more emotion than in the past and what happens is less predictable.

— Is Russia taking advantage of Obama’s reluctance to get involved in the Middle East?
— There’s a feeling that the Middle East has been in a kind of a vacuum since Russian influence declined with the disappearance of the Soviet Union, and the United States became more involved. Russia has reacted to that in a very negative way, saying: ‘You don’t know what you’re doing there anyway. You don’t understand that part of the world.’ There’s a famous Russian saying, the East is a delicate area.

— You’re not a 100 per cent supporter of Putin but do you think he is right on that?
— I’m not even a 50 per cent supporter of Putin, but I think that the view that the United States is the power that has destabilized the Middle East has merit. I think that Putin’s right when he says, quite openly, that he feels that the US is the one to blame for the turmoil we now have there. And nobody knows where this is going.

— You were brought up in America. Do you think the Americans just don’t understand the Middle East?
— When Clinton was seriously looking at the possibility of enlarging NATO, and taking in the Czech Republic, Poland and Hungary, George Kennan, one of the great American statesmen, said: ‘Don’t do this.’ He said, ‘That will be one of the most extreme, tragic mistakes of the post-Cold War period. It will push Russia in the wrong direction. It will make the development of democracy in Russia more difficult. It will play into the hands of national-ists in Russia, and ultimately it will lead to a Russian policy that will not be to our liking.’ He was on target. But there are not many people who really understand who the Russians are. When they say, ‘How can the Russians support Putin?’ it means that they don’t understand what Putin has done, which is strange after all these years.

— You mean Putin made people richer?
— The Russians are a proud people who consider themselves a great nation. And they were shoved into a corner after the demise of the Soviet Union, and they were told they were no longer a great country and that they had just better shut up, they’d lost the Cold War. Putin’s the guy who gave them back their pride. That is the No 1 issue. It is summed up in the phrase ‘Crimea is ours’. And that is more important than material wealth – at least it is now.

— Yesterday I watched an episode of your documentary series on England, about the transition from empire to multicultural country. Are there lessons for Russia in this?
— The difference between the British empire and the Russian empire, whether Tsarist or Soviet, was of course that the British empire was overseas. Russia shared borders with its colonies – they were never called that, but that’s what they were. And so the physical relationship between the Russians and the rest was much closer. Everybody spoke Russian, and spoke it fluently. So it’s a much more difficult thing for the average Russian to say: ‘Okay, let them go.’ At the end of the British empire, there was an understanding – ‘Let them go and we’ll stay friends.’ And there was not a sense – at least it was not made public – that ‘we’re superior to them and they should listen to us’. Whereas the Russians always considered themselves to be superior to all the others. ‘How could they do this to us?’ is a common reaction. Especially the Ukrainians, our little brothers – how could they possibly do this to us?

— If you were Ukrainian you wouldn’t like to be called ‘little brother’ would you?
— Of course not. The Ukrainians always had a much more negative attitude towards the Russians than vice versa, because they were looked down upon. And so the minute the Soviet Union fell apart, in the former republics, the attitude towards Russians was much more negative. A lot of the Russians had to get out, especially from Central Asia. They were threatened, physically. They were disliked intensely. Although I must say that the dismantling of the Soviet Union did not lead to a major civil war, unlike the break-up of some other empires.

— After more than 25 years, isn’t it time to get over the imperial hangover?
— Russia is still a very young country with all the problems of a young country. But it’s more difficult than that because the people who run the country are all products of the Soviet Union. They all went to Soviet schools, they were all Young Pioneers, they were members of the Komsomol, and they were all party members. Those people have the mindset of a Soviet citizen, but they’re in a new situation. So they’re trying to run a country that’s different from the one that they were brought up in, but with a mind-set of the past. I think that’s one of the most difficult problems this country is facing and why it’s not going to change radically soon.

— How long?
— Two or three generations at least. When I talk to youngsters, and tell them I was ‘ne vyezdnoi’ (not permitted to travel abroad), they say, ‘What is that?’ I think it’s very important that they cannot conceive of a reason for not going abroad, apart from not having the money. You have to have that generation running the country before it can really change.

— You’ve been prominent in the Russian media for an impossibly long time. Is the secret of survival bending with the political wind?
— There are many people – pro-Kremlin, pro-Putin ones – who don’t like me. And I ask important people unpleasant questions. It could be that I’m a token, of course. The state can say, ‘Hey, we have freedom. Look, we have Pozner.’ On the other hand, it’s very personal, and I think Putin likes me. But he will never go on my show. He has refused three times.

— Is he afraid of a tough question?
— I don’t think he’s afraid of anything, but anyone who occupies that kind of post will have to ask himself, ‘What’s in it for me?’ I don’t think he could gain anything. Could he lose something? He can become angry very quickly and loses control of himself. You can see the jaw start churning when he doesn’t like a question. He’s got a thin skin, different from Boris Yeltsin. You could say anything you wanted to Yeltsin, he couldn’t care less. In that sense he was a real Tsar.

— Is Putin actually a great strategist or is he merely a tactician who has been very lucky?
— It seems to me that he’s a very good tactician. And he has been a bit lucky. But not so lucky now. This period that we’re in right now, with Ukraine, with the Middle East, and with the Russian economy depending so much on the price of oil, is a very complex one. When and if we get out of it, it’ll be easier to say whether he’s a good strategist.

— Is Russia going to end up like the Soviet Union where only one view can be heard?
— I met with President Putin twice, one-on-one, for an hour, and I said: ‘You know you should get out of the media, just get out of it.’ He said: ‘Why shouldn’t the government have its own television?’ And I said: ‘Because nobody’s going to believe it, ultimately. Come on my show and tell me what the government thinks, that’s different.’

— But hasn’t state control of TV proved to be enormously helpful in getting Putin’s message across about Ukraine and Syria?
— In the short term, yes, but in the long term, when the people find out that they’ve been fooled, they’ll never believe you again. And a lot of that has happened here. There is an enormous amount of people who don’t believe anything the government says. If the government says, ‘Today it’s Thursday …’ They’ll say, ‘No, probably not.’ So short term? Yes. Long term? I think it’s a huge mistake. And the only person they trust is Putin. They don’t trust the Duma. They don’t trust the government. They don’t trust any officials. Putin is separate, because he brought Russia back.

— If you were interviewing Putin what would be your first question?
— I don’t want him to know. Seriously.