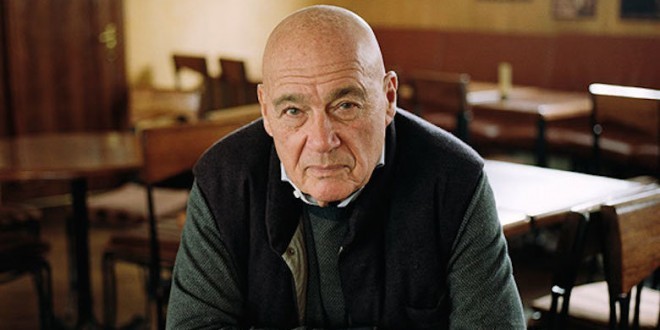 Vladimir Pozner: the «face» of Russia

Vladimir Pozner, the veteran Russian television presenter, knows all about propaganda. During Soviet times, he was — as he readily confesses — one of its most active practitioners. With his urbane manners, communist convictions and impeccable New York English and Parisian French, Pozner was omnipresent on foreign television, justifying the seemingly unjustifiable crushing of the Prague Spring in 1968, the invasion of Afghanistan in 1979 and the shooting down of a civilian Korean airliner in 1983. For many foreigners, he became the most instantly recognisable face — and voice — of the Soviet Union.

But in a conversation that stretches long into a showery, spring Moscow afternoon, the 81-year-old Pozner talks about how he lost faith in the communist system in the 1980s, handed back his party card and “repented of his sins” as a propagandist. He has since reinvented himself as an independent-minded television journalist (so far as that is possible in post-Soviet Russia) and is still working hard today. He has conducted more than 300 in-depth interviews for Russian television, with people ranging from Mikhail Gorbachev to Hillary Clinton. He has also presented much-loved travelogues on France, Italy and, most recently, England, examining the quirks and curiosities of their cultures (such as the significance of Magna Carta and the correct etiquette for eating peas).

Who better to discuss the latest flare-up in relations over Ukraine?

Alarmingly, given his long observation of the interplay between Russia and the west, Pozner argues that today’s misunderstandings are worse than during the cold war. “I think the relationship is more dangerous than it was back then,” he says. The raging over the fate of Ukraine has drowned out any civilised dialogue with the west and led to an explosion of misinformation in Moscow. “The propaganda itself has become much more sophisticated,” he says. “It’s a much stronger poison. It works much better and it goes much deeper.”

During the cold war, Pozner says, there was a mutual fear and respect between “the two 800lb gorillas” in the world, meaning that both the US and the Soviet Union had to take each other’s views seriously. Now, the relationship is based more on mutual scorn and contempt, with the US having many more important priorities in the world than Russia. After the collapse of the Soviet Union, he says, the world was left with only one 800lb gorilla, the US, and one “120lb chimp”, Russia, which resented its loss of status. “The gorilla is no longer afraid, nor does the gorilla respect the chimp, which makes the chimp extremely angry. And anger can lead to actions that are unpredictable, spontaneous, based on emotions rather than on serious thought,” Pozner says.

In this more fluid and emotional world, Ukraine has assumed enormous symbolic significance in Russia but also in the US. “There is a refusal of Russia to become part of the new world order where the United States is number one. And there’s a refusal of the United States to be anything but number one. Don’t be surprised at the anger here and at the readiness to pour some tar into your honey, as the Russians say.”

The US media, he suggests, have so demonised Vladimir Putin that is impossible for any aspiring presidential candidate to exhibit weakness towards the Russian “tyrant”. But, equally, Putin has built his reputation on his defiance of the US and cannot afford to back down. “So here we are, the rest of us, victims of what I consider to be a stupid, counterproductive relationship based more in personal likes and dislikes and total lack of understanding. On the one hand, the US leadership does not understand what Ukraine means to the Russians. On the other hand, the Russians do not understand the US, period.”

This mutual incomprehension, however, is not just confined to the leaderships of the two blocs. Why is it that in this age of international travel and mass communication — simply unimaginable to Russians during Soviet times — both sides regard the other with such a lack of understanding?

Pozner blames the internet, which acts as an echo chamber for propaganda and plays off national resentments. “It would seem to be a wonderful thing, and yet it turns out that the internet spews more hatred and more misunderstanding than the media back in those days,” he says.

But what exactly is propaganda? Where does legitimate explanation of a government’s position blur into deceitful propaganda? After all, Pozner himself still pops up on foreign television shows to criticise US policy or explain why Russians feel so strongly about Crimea.

Pozner’s immediate response is to quote Woody Guthrie, the American folk songwriter, who used to say that a lullaby is propaganda to a five-year-old kid not wanting to go to bed. On another level, he says, propaganda is putting forward only those facts and arguments that support your viewpoint while ignoring anything else. “There is no ‘however’ in propaganda,” he says.

Even though he says there is incomparably more freedom of the press in the west than in Russia, he extends his criticisms to some US media organisations, which have become highly partisan. “Our job is to inform and there is no such thing as patriotism,” he says. “Nowadays there is virtually no journalism; it is all advocacy.”

Boasting three passports (Russian, French and US) and a multicultural upbringing, Pozner is well placed to understand — and explain — other countries’ ways of thinking. His father, Vladimir Alexandrovich Pozner, was a Russian Jew and a Soviet intelligence agent. His mother, G?raldine Lutten, was a French Catholic from Arcachon. The young Vladimir grew up in Paris and New York, where he attended the Stuyvesant High School and thrilled to the whack of baseball bat on ball. A few years in Berlin followed. Then, in 1952, shortly before Stalin’s death, his family moved to the Soviet Union. Aged 19, Pozner was plunged into a whole new world and came “profoundly to believe in the Soviet system”. After studying physiology at Moscow State University, he ended up working in Soviet radio and television for “external consumption”, as he puts it.

Pozner says he feels great no matter where he is in France. He loves the culture, the camaraderie, the combination of profound sentiments and remorseless logic. “I always say, the French don’t think they’re the best — they know they’re the best.” The red cotton stitching on the buttonhole of his chequered sports jacket, signifying his membership of the L?gion d’honneur, suggests that his admiration of France is reciprocal.

Our conversation is taking place in Chez G?raldine, a French brasserie that he and his brother (an expert in medieval Vietnamese history) opened in Moscow in honour of their mother, who was a wonderful cook. Pozner lovingly points to the photographs of his family that hang on the restaurant’s walls. “That’s my mother when she worked at Paramount as a cutter or an editor?.?.?.?That’s my mother, cheesecake in New York City?.?.?.?This is Germany, I’m 17, my brother is six and that’s my father,” he says. “She would have been happy to see this place; it’s French food and it’s got a pretty nice reputation.”

Pozner has had a colourful personal life and been married three times. While at university, he married Valentina Chemberdzhi, a fellow student and philologist. Together they translated Woody Guthrie’s autobiography. The couple had a daughter, Yekaterina Tchemberdji, now a distinguished pianist and composer, who studied music in Moscow but largely made her career in Berlin.

Following his divorce from his first wife in 1968, Pozner married Yekaterina Orlova, a journalist who worked at the Novosti press agency and later helped him found the Pozner School for Television Excellence. He married a third time in 2005 to Nadezhda Solovyova, a showbusiness impresario who has staged dozens of concerts in Russia for leading international stars, including Elton John and Diana Ross.

Pozner also enthuses about the excitement, the jazz and the humour of New York, where he was once an “all-American kid” and a paperboy; he returned to work there in the early 1990s on a weekly current affairs programme with Phil Donahue. He tells the joke about a tourist in Manhattan asking two African-American musicians how to get to Carnegie Hall. “Practise, dude, practise,” comes the answer. “That is very American, New York humour and I love it. It’s part of my blood; it’s who I am,” he says.

And what does he think of the English following his latest television series?

In spite of starting with a certain Gallic mistrust of les Anglais, Pozner says he ended up “with an extremely positive attitude”. He became fascinated by the subtle gradations of the class system, the flexible use of language to mean the opposite of what was being said, and the concept of privacy (for which he says there is no equivalent word in Russian) asserted even by a seven-year-old kid shutting his bedroom door to keep out his parents.

After long investigation, Pozner concluded that the main trait of the English character was embarrassment. “I think the English are always embarrassed,” he laughs, flashing his gleaming-white television teeth. “I don’t think they realise that but it’s an amazing thing. The pub becomes the only place where there’s real democracy. It doesn’t matter who you are — the king could walk into the pub, he’d have to wait his turn to be served. People just strike up a conversation because it seems to be so difficult to have a conversation in general.”

Two other aspects of England, he suggests, are also striking to a Russian audience: the legacy of empire and the tradition of democracy. According to Pozner, the English identity became wrapped up in the British empire in much the same way that the Russian nationality became subsumed into the Soviet empire. Both peoples are trying to rediscover their original identity now that their empires have collapsed. “After they had to give up the empire, the English realised they were no longer British. But they had forgotten what it was to be English. Shakespeare knew what it was to be English. But now they’re trying to figure it out again.”

Pozner says his viewers were also “knocked out” by the episode in which he showed David Cameron as prime minister losing a vote in the House of Commons to authorise military action against Syria. “At the end, Cameron said, I still think I was right but you represent the English people, you have voted against me, and I will obey that. And I thought, this is what they should see,” he says. Pozner retraced the history of England’s checks on executive power back to Magna Carta. “There are, like, four original copies left. And I have to tell you, I was emotionally affected by just seeing this thing.”

The contrast with the Russian tradition of centralised power could hardly be starker. All authority is vested in the Kremlin, and in the person of President Vladimir Putin. “I mean, can you imagine anyone saying to the tsar, your majesty, you’re out of your f***ing mind? Or saying to Stalin, hey, Joe, you want to think that over again? No, of course not. You have people who are trying to figure out, ‘What would he like to hear?’”

Russia, though, remains the one country that Pozner says he could never make a documentary about because it is just too familiar. That was brought home to him when his grandson, born in Germany, visited Moscow and asked him why all the telephone poles were leaning at an angle, something Pozner had seen a thousand times but had never really noticed before. “Well, of course, in Germany all the poles are straight, but I no longer see that they’re slanted in Russia. You have to see things that regular people don’t see.”

John Thornhill is the FT’s deputy editor and a former Moscow bureau chief.