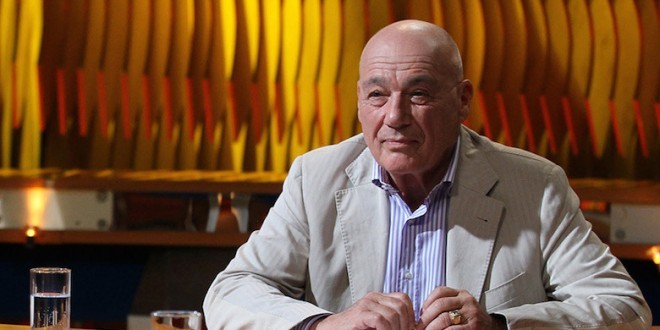 Who said that what’s happening in Ukraine can be referred as democracy?

In an interview with RBC, Pozner speaks on what the Russians and the Americans think of each other, on democracy in Ukraine and Russia, on Russia’s turning East, and journalism in our countries.

On Journalism in Russia and the USA

I am very disappointed in our country’s journalism, and I must say that I’m pretty much disappointed in the American journalism, as well, although there are much more long-standing and solid journalism traditions in the USA. And concerning what we call an «information war»… I don’t even know whether this terminology is correct. Who is fighting with whom? When a war is waged, people clash with each other. And in our case, we’re trying to convince our audience of one thing, while they’re trying to convince their audience of some other thing. This is not a war, there are no clashes – simply a desire to convince the audience that they’re bad and we’re good.

On What the Russians and the Americans Think of Each Other

I’ve encountered people who argued furiously that our troubles in Russia… well, they say something like «Our education system broke down, the health system has collapsed, who to blame? The Americans!» What have the Americans to do with this?

Well, there was a time in Russia when the Jewish people were to blame for all the bad thing. There is obviously a rather more convenient object right now, and it’s the result of mass media’s efforts. I don’t believe that it’s dangerous in the sense that it can lead to a nuclear exchange – no, it won’t because such decisions are made not by mass media.

Russia is a European country. One can tell it is by all the essential things this country possesses. Namely, its literature, paintings, music, and art in general – it’s all Western. It all originated from Christianity. It’s a Christian country. Well, it’s Orthodox, to be specific – but it doesn’t matter, since there are common origins (e.g., biblical, etc.). And as for the East and Asia, it’s a way other thing (different culture, way of thinking, etc.) – everything differs. And if one expects that there may be a rapprochement between Russia and these countries, particularly with China, – well, he (or she) simply doesn’t understand the situation quite well. Yes, there is no doubt that they can speed up trade, but Russia’s turning East will be limited only to a forced and economically justified step. But I’ll say it again: I think it’s not for long.

On Democracy in Ukraine

When did anybody say that what’s happening in Ukraine is a democratic thing? There is no democracy, when there is a ban on certain TV channels. It’s like going back to the Soviet Union period, when ordinary people were forbidden to listen to different voices («Voice of America»?? radio, etc.), read certain books, and watch certain movies. What does this mean? This means that you can’t convince your own citizen that you’re right, so you impose a ban on everything controversial to prevent the citizen from learning that. It’s evident that this is a weakness. It is a weakness, it underlines the lack of democratic view, because in the end democracy is not just a constitution, it’s not a set of laws, democracy must be in a person’s brains – it’s how a person reacts to something. So how there possibly can be a democracy in Ukraine? There can’t be one – as well as in Russia. It takes time (in some countries up to a couple of centuries) for people to finally start thinking democratically.

I’ve said it before, and I’ll say it again: we have a Soviet country. What do I mean by saying that? I mean that the majority of Russian leaders were born in the Soviet Union, went to the Soviet school, they were the Young Pioneers and the Komsomols, and many of them were the members of the Communist Party. Those are people with the Soviet background thinking in a certain way and acting in a certain way. This is inevitable, they can’t change the way it is. That’s why everything what happens is quite logical for me, though not too pleasant. But I believe that this is a temporary phenomenon, their own children are different, while their grandchildren are way too different.