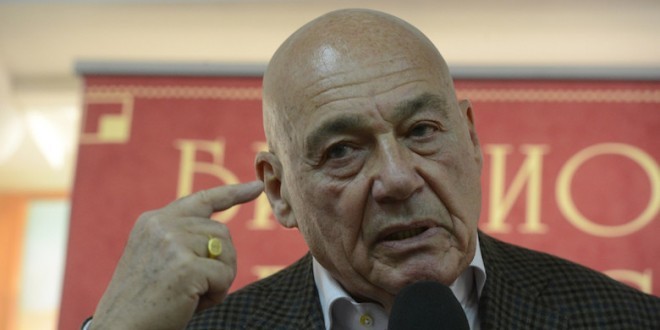 I’m sick and tired of this Ukrainian-Russian story

Vladimir Pozner, a well-known Russian journalist, explains to GORDON’s journalists why Ukraine isn’t an example to follow for many progressive Russians, and why the Crimea will always be part of the Russian Federation.

Vladimir Pozner, a well-known Russian journalist and TV anchor, devoted more than a third of his life to Soviet journalism. Back in 2010, in an interview with GORDON’s head Dmitry Gordon, Posner admitted that he regrets spending his best years on Soviet propaganda.

Since 2000, his shows are being aired on Channel One Russia. In an interview with GQ magazine, Posner said that there is a censorship on TV. In particular, TV anchor can’t invite to his show some of the Russian oppositionists – Navalny, Kasparov, Sobchak, and others.

I got in touch with Vladimir Posner to ask him about Russian propaganda, infamous story of the crucified boy by Channel One Russia and some other things. Eventually, little by little, we got a half-hour interview about the Crimea, Donbass, war, Ukrainian chauvinism and Russia, where «justice is above the law».

— How did you react to TV spot by Channel One Russia about a three-year boy in Slavyansk, who was allegedly crucified by the Ukrainian troops?

– I haven’t seen this TV spot yet, because I’ve been abroad for more than a month and will stay there for another two months. So I’m out of touch with this and can’t give comments.

– I’ll ask broader: are there any taboo subjects in a specific genre of propaganda?

– There is no such genre; there is simply propaganda with a primary aim of convincing by any means. Goebbels once said something like that. My answer is the following: propaganda knows no limits and rejects taboo.

– How to fight propaganda?

– It’s a difficult question. It all depends on the society. There were instances when a state rested entirely on propaganda (e.g., the Soviet Union). President Abraham Lincoln remarkably said, «You can fool all the people some of the time, and some of the people all the time, but you cannot fool all the people all the time.» Little by little, people realize that they are fooled by propaganda and begin to look for other sources of information. Something like that was in case of the Soviet Union, where, according to my data, some 40 million people regularly listened to foreign voices of BBC and Voice of America. But if the state itself is the main source of propaganda, how can we fight propaganda?

– Let’s clarify the question: how can Ukraine fight Russian propaganda?

– I don’t keep track of Ukrainian-Russian situation attentively enough. Not only because I am abroad. It would sound wrong, but honestly, I’m a bit sick and tired of this Ukrainian-Russian story. As stated in Romeo and Juliet, «A plague on both your houses».

I think that in the current situation there is a kind of mutual propaganda between Ukraine and Russia, and each country pursues its own political goals. But it should be realized that the Russian propaganda is aimed primarily at Russian viewer, reader, or listener. Ukraine can’t do anything about that. A Russian viewer or reader won’t purposefully look for answers in the Ukrainian media, because he thinks that they are even less trustworthy than the Russian media. Many rather progressive Russians don’t perceive Ukraine as an example to follow.

– What is the reason for that?

– Do you have anything worth following as an example? Of course, everyone makes conclusions based on their own experience. These are some general conclusions, but nevertheless. I rarely visit Ukraine. I’ve been there a dozen times over the last 10 years, mostly in Kiev. I was totally shocked by the levels of chauvinism and anti-semitism, to which I was exposed while in Ukraine.

– In what did it reflect in exactly?

– In the locals’ words – one can hear them shouting «Jew» and «Moskal» time and again. I was struck by the fact that all books by Nikolai Gogol are being translated into Ukrainian. And some people argue furiously that Gogol is a Ukrainian writer. This is ridiculous! Nikolai Vasilyevich didn’t write a single word in Ukrainian. He was a Ukrainian by birth, but he wrote in Russian. This is neither good nor bad, it is a fact. But when someone shouts, «Wha-a-what do you mean Gogol isn’t a Ukrainian writer?!», almost willing to kill an opponent – this is nonsense. And there is chauvinism.

– Don’t you want to follow Ukraine’s example at least in terms of media freedom? In Russia more or less objective media are destroyed. It’s surprising that Echo of Moscow radio station is still afloat…

– Firstly, I can’t agree with your statement, although the situation in media industry – especially federal – in Russia does depress me. Secondly, I’d like to remind you that more than 60% of all Echo of Moscow’s shares are owned by Gazprom-Media Holding, which can shut this radio station sown in one second, and it’d be absolutely legal. Why isn’t it happening? Perhaps it is worth some consideration. Thirdly, I’d like to confess: personally I somewhat envy Ukrainian TV in terms of current situation.

Nevertheless, the Russians don’t perceive Ukraine as a model of state, a country about which they can say, «We want to live like them!» The Russians can say that about the USA, Germany, France, and Japan – but not about Ukraine. The reason for that lies in your economic indicators, which are in a terrible state. The reason for that lies in corruption – your country even managed to surpass Russia in terms of corruption. And what about the Verkhovna Rada? After all, your parliamentarians literally fight with each other within the very parliament’s walls! Believe me, it does not appeal as something democratic and great.

– What do you think would be the outcome of the Ukrainian-Russian conflict?

– I don’t like predictions – especially related to politics – one can find a mare’s nest. I just hope that there won’t be a full-scale war. However, the things that have already happened resulted in a very serious feud between ordinary Russians and Ukrainians. Unfortunately, this one will run and run.

– You have also admitted more than once that after the Second World War you could hear no German speech due to a huge aversion to Nazi Germany. More and more ordinary Ukrainians join the boycott of all things Russian – food, movies, concerts…

– It isn’t worth comparing such things. Nazi Germany did some scary things to Russia – 26.6 million killed! It’s almost half the population of present-day Ukraine. So let’s omit the boycott – in the end, Russia did not occupy Ukraine…

In 1954, Nikita Khrushchev suddenly decided to apologize to the Ukrainians for killing so many of them during the repressions (1930s-1940s) and presented the Crimea to Ukraine. And he timed it to coincide with the 300th anniversary of Ukraine’s addition into the Russian Empire. I’d like to emphasize that Khrushchev personally decided to present the Crimea, as if it belonged to him. Do you know that there was no quorum on that issue in the Supreme Soviet of the USSR? And what if Khrushchev would decide to present the peninsula to Uzbekistan, what then? But nobody cared, because in a totalitarian country Secretary General’s wish is everyone’s command. However, even in a nightmare Nikita Khrushchev couldn’t imagine that the Soviet Union would collapse.

– I wonder what part of Ukrainian territory would be enough for Russia to fully restore «historical justice»?

– Was there anything given away besides the Crimea?

– Judging by the events of the last three to four months, Putin longs for «historical justice» for southeastern Ukraine, as well…

— The so-called Novorossia — is a wa-a-ay different matter. That dog won’t hunt. Another thing is to figure out who to blame for the fact that, to my great regret, so many people (not sent from Russia, but namely the locals) in the southeast don’t associate themselves with Ukraine.

– And in the Crimea too?

– You shouldn’t compare Donbass with the Crimea. You asked, «Where does historical justice end?» It ended on the Crimea. All of it. I understand that Ukraine is offended, but it happened.

I am absolutely convinced that the Crimea will remain a part of Russia. There is nothing to argue about. This is one of the few issues on which the vast majority of Russians supported their government. I’d like to emphasize that it’s a rare situation, because the Russians are usually extremely critical of their authorities. But Putin gained a great support thanks to the accession of the peninsula, because people are convinced that the return of the Crimea was absolutely right and fair thing to do…

– In Russia, justice is above the law. I don’t advocate this approach – I only describe some quite obvious things.

When discussing a conflict situation, let’s suppress our own biases and stay as reasonable as possible. Unfortunately, relations between Russia and Ukraine were damaged for a long time ahead. They were damaged at the government’s level, as well as at the level of ordinary citizens. As for the situation in Donbas, I strongly hope that this conflict will be resolved in Ukraine’s favor.