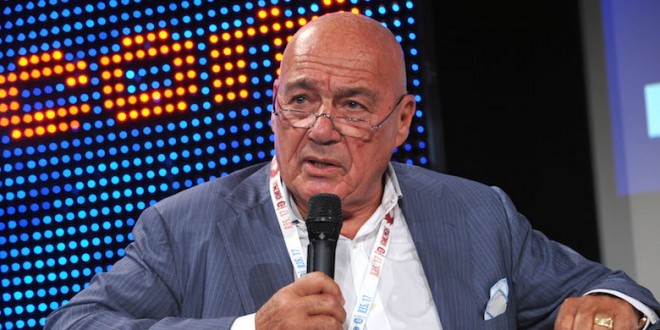 People On Top Are Scared

As one of the most recognizable personalities on Russian television, Vladimir Pozner is no stranger to the spotlight. But the 78-year-old veteran journalist found himself in the midst of a controversy last month after lambasting the state of justice in the country during his popular show on state-controlled Channel One.

Pozner harshly criticized the abduction and alleged torture of opposition activist Leonid Razvozzhayev, which he said was reminiscent of KGB tactics. He also condemned the prison sentences of members of the feminist punk rock collective Pussy Riot.

The October 28 broadcast led to calls for Pozner to be sacked, including from United Russia State Duma Deputy Ilya Kostunov, and rumors that he may flee the country.

RFE/RL correspondent Richard Solash spoke to Pozner on the sidelines of an event hosted by the Eurasia Foundation in Washington.

RFE/RL: For the record, will you continue to host your Channel One show and do you plan to stay in Russia?

Vladimir Pozner: The answer is yes. There has been a rumor spread that my last show was going to be on the 11th of November and then I’d be leaving Russia forever. [That’s] totally without any kind of basis.

RFE/RL: Why did you decide that this was the moment to come out with such a sharp critique — and to do it on state-controlled television?

Pozner: First of all, it’s the only place I can do it if I want to reach anybody. Of course, I could do it on my site and I could do it in a magazine that is read by a very small number of people; but if I want to reach any large number of people, my only way of doing it is on one of the three television networks that are all, directly or indirectly, controlled by the government. That’s point No. 1.

Point No. 2: I said it because I felt that this was something that had to be said. I felt that the whole Razvozzhayev story was absolutely incompatible with even the remotest understanding of a half-normal judicial system, and I felt that it was important that I speak out because I am not seen by anyone as being a dyed-in-the-wool opposition person nor, for that matter, dyed-in-the-wool pro-government. I’m seen more as being someone in the middle. And therefore if I say something very critical and very loud, it’s prone to generate more interest, because the others are predictable in that sense.

I guess I’m not. And that’s why there was the outcry that ensued.

RFE/RL: Do you see any signs of fracture within the Kremlin and a faction that would perhaps be more receptive to the critical points you’ve made?

Pozner: I find it very difficult to answer that question. You know, we sometimes see what we’d like to see, but it isn’t there. I don’t think there is any real split. I think that basically, Mr. [Vladimir] Putin is in charge. There may be some differences between the way he sees what should be going on and, say, what Mr. [Prime Minister Dmitry] Medvedev does, but this is not a split. This is just normal human differences.

I’m certain that there are some people in the Kremlin who support my view, and there are some who don’t. But whether it’s Medvedev and Putin, I would very much doubt. I don’t know, to be quite frank with you.

RFE/RL: You’ve sounded the alarm on the Razvozzhayev case, but there have also been recent legal changes in Russia — relating to foreign-funded NGOs, the definition of treason, political rallies, et cetera — that some say signify deepening authoritarianism. Overall, how would you characterize the way things are going?

Pozner: I would characterize them, first of all, by saying that I don’t like the way they’re going and I do feel that there’s an element of paranoia. This is reflected in these laws: the law on meetings, which on the surface is a normal law but can be used in a very repressive way; the law pertaining to who is or who is not a traitor — again, it can be used in very different ways.

And so I would say that definitely there is a danger. There is a danger here. It’s all in the constitution. You don’t have to have additional laws. It’s all very clearly said. I get the feeling that some of the people on top are scared and they’re trying to figure out ways to control people who are less and less supportive of the government — they believe less and less in the people who are at the top.

RFE/RL: Did your sense of that dynamic influence your decision to offer the criticism that you did?

Pozner: Judging by the reaction to what I said, clearly there were a lot of people listening. When I talk[ed] about Razvozzhayev and the KGB in the 1930s, the point I was making, simply, was that when a representative of the police, if you will, said that [Razvozzhayev] had confessed, I simply said that the way people were forced to confess back then, probably you would sign it, too.

I wanted to make that point, because confession really doesn’t mean anything if you use torture and other methods. It’s not that I think a long time in advance and say to myself, «Well, if I say this, then maybe this is going to happen.» Very often I act on gut feeling. I simply feel that as a journalist I have to say this. I just don’t really have a choice.

I do think that being free is not a question of choice. You have to do certain things to preserve your freedom or you say, «OK, the hell with my freedom [and] I’m not going to do that.» So that’s what really moves me. And I think that this is a time when more people are listening. But it could be also dangerous, because different people are listening and some are not so happy with what I’ve said and some demanded that I be fired.

I must say that Mr. Putin, as yet, has made no comment, and he probably won’t.

RFE/RL: Have you been under any direct pressure to either step down or apologize for your remarks?

Pozner: Not only have I not, but when I met with Konstantin Ernst, who is the general director of Channel One — and I met [with him] for a completely different reason — he began the meeting by saying, «Well, should I fire you?» And I said, «Yeah, go right ahead! I mean, we’ll really get some hot news there.» And he kind of laughed and said, «I don’t know who this stupid guy is, but let’s forget about it.» And that was that.

Now, he may have gotten some phone calls, but he, insofar as he relates to me, has never put pressure on me, saying, «You know, I have been getting these phone calls and this is very unpleasant.» So I have not felt any kind of pressure.