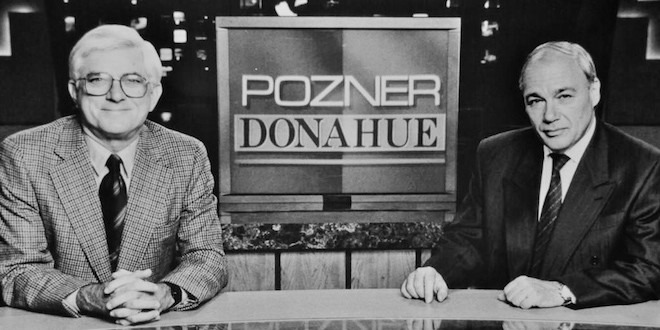 Maybe you have seen Vladimir Pozner on »Nightline» or »Donahue.» Born in France and raised in the United States, he made his career in the Soviet Union as an unaccented American voice on Radio Moscow’s North American service and lately has been gracing American television, expounding on this and that.

»Parting With Illusions» purports to be an account of his life. He spent the World War II years in New York, where he attended Stuyvesant High School. In 1952, when he was 18, he was taken to what would become his motherland by his Russian-born father, »a staunch supporter of socialism and of the Soviet Union» who wanted to get away from the anti-Communism of the 1950’s.

As autobiography, »Parting With Illusions» is not compelling; the self-revelation is entirely inadvertent. There is some sharp gossip about the way midlevel apparatchiks in Soviet journalism get ahead or get left behind, but Mr. Pozner is more interested in his own role as a liberally inclined party man who knows the best and the worst of both the Soviet Union and the United States from personal experience, and wants nothing more than to share his insights with an American audience.

Although Mr. Pozner speaks New York English, his writing has a strong accent of the Popular Front circa 1936, when Communist Party members in the United States were intent on proving that they were 200 percent American. Here he is on »the America that means so much to me»: »Tom Paine and Thomas Jefferson and Abe Lincoln. And the great songs of America that celebrated John Henry, Joe Hill, Jesse James, Frankie and Johnnie, and hundreds of nameless others. And the people who sang them — Woody Guthrie, Leadbelly, Pete Seeger, Billy Holiday, Bessie Smith. And the Declaration of Independence and the Boston Tea Party.» And Irish cops and a black maid and baseball. Fans of the letters of Julius and Ethel Rosenberg will enjoy this book.

Homage to the Popular Front also takes the form of adjusting facts to suit desires. He writes of the execution in 1927 of Nicola Sacco and Bartolomeo Vanzetti, the case that brought a decade of liberals and radicals into the streets: »Today we know they were framed; the state of Massachusetts has acknowledged their innocence.» Although the admirable proclamation by Gov. Michael A. Dukakis in 1977 apologized for some aspects of the Sacco-Vanzetti trial, it made no acknowledgment of their innocence. Mr. Pozner also is taken with the idea that the murders of John F. Kennedy and Martin Luther King Jr. were part of conspiracies.

The big difference between Mr. Pozner today and the Popular Frontniks of yesterday is that he criticizes Joseph Stalin. If he had done that within the hearing of the people who ran the progressive Greenwich Village school he attended as a boy, he would have been blackballed as a redbaiter. Times have changed, and Mr. Pozner has changed with them. He apologizes now for having supported the arrest and exiling of Andrei D. Sakharov in 1980. He has no kind words now for Leonid I. Brezhnev, under whose regime he built his career. However, he has nothing bad to say about Mikhail S. Gorbachev, now presiding.

Mr. Pozner does not claim to have been a premature anti-Stalinist, only a loyal citizen who (while not uttering anything that might get him into trouble) refused to speak what he did not believe. He is critical of those who left their motherland when he was trying to improve it from within. Defectors, he writes, »became pawns in a political game and, as such, did far more harm to their country than good.» Take that, Aleksandr Solzhenitsyn, Andrei Sinyavsky, Joseph Brodsky, Vladimir Voinovich.

Readers bowled over by that reasoning will also be impressed by the even-handed treatment of the K.G.B. and the C.I.A., the news that artists face similar problems under Communism and under capitalism and the analysis of the Berlin Wall: »It solved the problem of economic drain, but it created a far greater and much more difficult problem, both in terms of how it affected Germans on the inside of that wall and the kind of ammunition it provided for anticommunist ideologues all over the world. Extremism at its worst.»

Mr. Pozner is annoyed that some in the West »have branded me a propagandist.» He attributes that slander to malicious or mindless anti-Communism and hopes that when Americans come to see him »as a normal, authentic, honest person, an honest Soviet,» they will begin to question America’s military spending, the cold war and anti-Communism. He asks: »How many Americans have ever met — let alone know well — a single communist?» Tell it to the Romanians, Comrade.