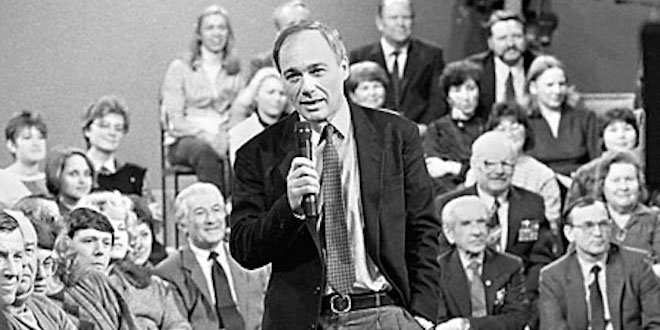 Pozner «Not Your Average Russian»

WHO is Vladimir Pozner?

A television star, for one thing; a Soviet spokesman, for another. But who is he really? «Not Your Average Russian», on Channel 13 at 10 o’clock tonight and Channels 21 and 49 at 8:30, tries to answer. It also asks a question about Mr. Pozner: «Can we trust him to tell the truth about the Soviet Union?» This is no small question.

Mr. Pozner appears frequently on American television. If you watch «Nightline», «Donahue» or any of a number of «spacebridges», you have seen him. United States and Soviet citizens talk to one another on spacebridges — satellite technology joining the two countries. Mr. Pozner is the urbane moderator on the Soviet side.

«Not Your Average Russian» follows the Paris-born Mr. Pozner as he visits New York, where he attended Stuyvesant High School in the 1940’s. Eventually his family moved to East Germany, and then to Moscow.

In New York now for the first time in 38 years, according to the program, Mr. Pozner is «about to take on one of the most probing interviewers — Phil Donahue».

«I love New York», Mr. Pozner replies. «It’s part of my childhood». Pozner Indeed, it is; Mr. Pozner even sounds like a New Yorker. Did the other kids at Stuyvesant really beat him up because he was a Communist? He says they did. Did his family escape being sent to Siberia only because Stalin died? He says that happened, too.

Whether these things are true, or whether we trust Mr. Pozner at all, may be incidental; as an American media consultant notes on the program, Mr. Pozner is very effective at what he does. Sometimes his eyes seem to fill with tears. Occasionally, he shows indignation. As a Soviet scholar says almost admiringly of Mr. Pozner: «He’s a manipulator».

He is. One could imagine that Mr. Pozner, if he had remained in this country, might have become one of the better television evangelists. «Not Your Average Russian» — produced by Julia Dixon Eddy — doesn’t answer all the questions it raises about Mr. Pozner, but it does give some hints.