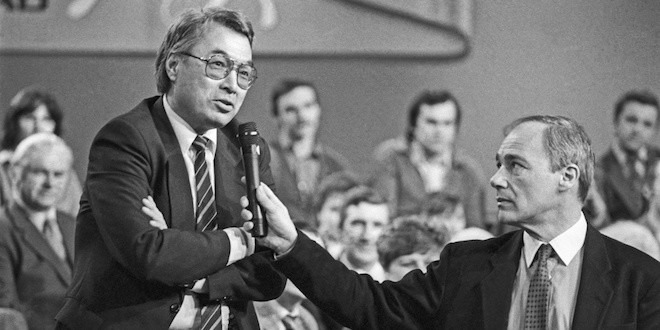 The face is open, earnest. The speech is perfect idiomatic American English, with a hint of Brooklyn. The message is Soviet.

Pozner, 52, the Kremlin’s main man when it comes to explaining and defending his government for the American media, has returned to the United States on a PR mission, temporarily back in the country he and his parents left when he was 15.

The son of a French mother and a Russian father who worked for MGM inNew York from 1940-49, Vladimir Vladimirovich Pozner is a commentator for the North American service of Radio Moscow, an arm of the Kremlin. His five-minute, daily commentaries are delivered in English with a strong Soviet twist. He also appears weekly on Soviet TV.

These days, he may be almost as commonplace on American TV. He’s a red hot Red, a hit, on a media run that has him turning up on American TV with astonishing regularity this month, reflecting the Kremlin’s zest for better press.

«The Soviets are waking up to the fact that they can adopt Western-style public relations and dress up their world,» said Stuart Loory of Cable News Network, recently returned from the second of two long tours as a Moscow correspondent. «To put it in Madison Avenue terms, they have a product they want to sell, and it’s that they are for peace and the U.S. is for war.»

The Kremlin doesn’t have to hire a PR firm. Pozner is that firm, disarming, yet agile and athletic, leaping like Baryshnikov over questions and questioners.

Are the U.S. media Pozner’s patsies?

«Absolutely,» said Marshall Goldman, associate director of Harvard’s Russian Research Center. «After years of the Soviets saying nothing, here you have this guy who walks and talks and speaks like an American. He can say what he wants because the people interviewing him just don’t know the facts.»

Pozner has made scores of appearances from Moscow on ABC’s «Nightline» and other U.S. programs since 1978. Only in the last several years, though, have the Soviets given our TV a bear hug, including participating in global space bridge dialogues with Americans.

And that means Pozner.

«Nightline» host Ted Koppel remembers Pozner at his best in 1983 when he came on the program to defend the Soviet downing of Korean Air Lines Flight 007. «He was very, very good,» Koppel said. «He was, on the one hand, sympathetic to the families of the passengers, but he wasn’t about to give an inch. He came on with very little information, but he was sure the Soviets wouldn’t shoot down an innocent plane. He played a very poor hand very well.»

He was also in top form last week on «Donahue,» rejecting criticism of Soviet policy by deftly slipping the shoe on the other foot: «I think it would be insulting if I say (to the United States): ‘You guys can’t do this or you guys can’t do that.’ »

The man sounds like Henry Aldrich. As Boston TV producer Steve Atlas put it: «The Soviets have entered the media age with a vengeance and Pozner is their Herb Schmertz.»

The catalyst for Pozner’s America homecoming is a sequel to last December’s space bridge program, «A Citizens’ Summit,» a dialogue via satellite between Soviets in Leningrad and Americans in Seattle. The co-moderators were Pozner in Leningrad and Phil Donahue in Seattle.

«Citizens’ Summit II» is being limited to women, in Leningrad and Boston, where Pozner has spent this week helping select the American participants for the June 22 event, which again will be co-moderated by Pozner and Donahue and syndicated nationally in one- and two-hour versions. It’s a production of The Documentary Guild, The Hearst Television Group and Soviet Radio and TV, in association with Multimedia Entertainment.

Meanwhile, since arriving in the United States recently, Pozner has managed to squeeze in New York appearances on two «Donahue» shows. «I confess to liking him,» Donahue says.

And that’s not all. Since Monday, Pozner has been interviewed nightly on the WGBH-TV news here. «If I said we didn’t have some trepidations about being snookered, I’d be lying,» said WGBH news director Alan Foster.

Pozner has gotten his visa extended and more TV is coming, including announced appearances on CNN’s «Crossfire» tonight, next Wednesday’s «Viewpoint» program (the topic is media manipulation) on ABC and CNN’s «Larry King Live,» schedule permitting.

» ‘Good Morning America’ wanted Vladimir to come on today, but we had to turn that down because we needed him,» Edward Wierzbowski, one of the American organizers of «Citizens’ Summit II,» said Wednesday.

Pozner was able to fit in «The MacNeil/Lehrer NewsHour,» though. For a coming segment, the public TV program last week had a TV crew accompany the Soviet spokesman on a nostalgic visit to his old neighborhood in Lower Manhattan where he dropped by his old elementary school and chatted with teachers and students.

«He even paid a $1 library fine he owed from 40 years ago,» said Atlas, a WGBH producer who was part of the crew. «He seemed visibly moved to be returning. He is an extremely persuasive and sympathetic person. I found it difficult to reconcile this Americanized individual with his ideological positions. It was a little bewildering.»

For good measure, they showed Donahue taking Pozner by a softball game that Donahue regularly plays in, Atlas said.

If you’re thinking all of this makes Pozner and the Soviets look like «just folks,» you could be right. It was those two recent «Donahue» performances that seemed to have brought Pozner his greatest celebrity in the United States.

With Donahue playing his usual devil’s advocate, Pozner and the studio audience began combatively, but by the end of the second hour were clearly enjoying each other, almost as if he were Alan Alda and they were fans of «MASH.»

It’s ironic that Pozner now would have a following in New York, with its enormous Jewish population, at a time when the Soviet Union is increasingly under attack for restricting emigration of Jews and others who want to leave the country.

Pozner was recognized everywhere in New York, said Wierzbowski. «People would come up to him and say, ‘Hey Vladimir, you did good on TV.’ »

He also was sometimes recognized and greeted enthusiastically in the Boston area this week while helping interview prospective participants for «Citizens’ Summit II.»

There he was Wednesday, in his checkered shirt and black corduroy jeans, looking Joe American, joining Wierzbowski and his interviewers in a working-class section of Cambridge, inside the Purity Supreme supermarket between Papa Gino’s pizza and Dunkin Donuts.

«I listen to your radio program every day,» a man told Pozner on the street later. An elderly woman with orange hair was asked if she wanted to be on «Citizens’ Summit II.» «Hey, mah, go fer it,» urged her burly son. Pozner laughed.